Books by I G Hulme 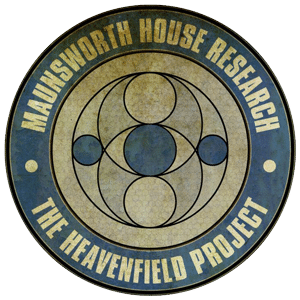 The Heavenfield Series are Dark Sci-Fi/Fantasy Novels which follow a team of scientists based in a British experimental research laboratory. When their discovery of a new reality they name 'The Heavenfield' comes to the attention of clandestine government organisations and secret fanatical groups, it causes terrible and global repercussions that threaten to bring the world to the brink of destruction.

Originally released as a serialised Podcast, the first novel, 'The Heavenfield', is now available as an Audiobook, eBook and in various Printed Releases (see the Shop).

The Dead Man's Feast is the second story in the series, and a third is currently underway.

"...The world has changed forever; we have opened the door to something which we don’t understand, and that door cannot be closed. I only hope we can change with the world." The man had a fevered stare, and Thomas found himself mesmerised by his words, obscure as they were.
The man suddenly stiffened, as if hearing a distant noise, then leaned close to Thomas once more.
"They’re coming," he whispered... 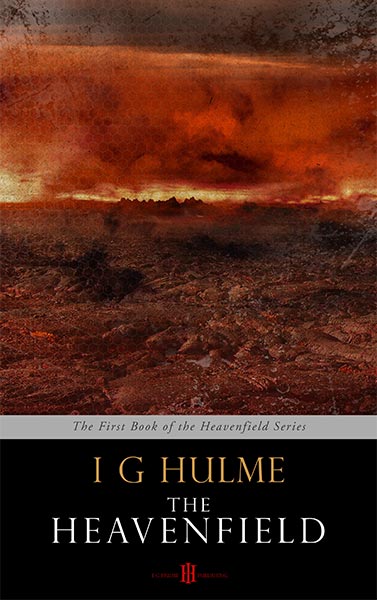 The Heavenfield novel follows Dr. Grace Palmer, Head of the Maunsworth Research Facility, and Thomas Sullivan, an awkward eccentric, as the Standing-Point Project they work on leads them and their colleagues into a frightening new world they name 'The Heavenfield'.

But people around the globe also have conflicting interests in the Field, and are prepared to bring the world to the brink of destruction to see those interests fulfilled.

Part spy novel, part sci-fi thriller with ominous and mysterious undercurrents, The Heavenfield has been described as 'thought-provoking, a compelling story with strong elements of allegory, beautiful and mesmerising'.

The Heavenfield is a fast-paced sci-fi thriller set within a British experimental Scientific Research Facility.
When Grace Palmer and her team discover a way into a mysterious world they name the ‘Heavenfield’, they trigger a devastating chain of events. Bizarre, unexplained murders and attacks on the Project leave scientists trapped in the Field with no way to return. As their air supplies run low and their equipment starts to fail, their nightmares begin to play out before them... 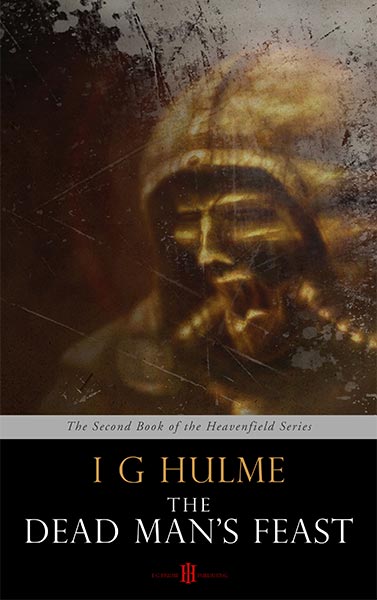 The sequel to The Heavenfield story sees a return for Grace Palmer to the Standing-Point Project after the chaos of the Battle of Maunsworth Field.

Thomas Sullivan, awkward eccentric and visionary of the Heavenfield Project finds himself lost within a terrifying inner journey, and ultimately stands at a crossroads, where the wrong choice of path could lead to the destruction of the world as we know it... 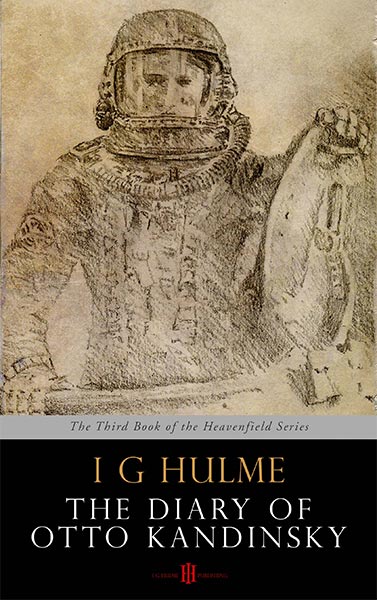 The Diary of Otto Kandinsky is a companion novel to the Heavenfield series, and takes the form of a series of journal entries from a young soldier, recruited to the Exile cause.

Set in the times before the first Heavenfield novel, when the Exiles built their Fortress and began to build up their fighting strength, it follows Otto through his training to become a member of the notorious Wraith squads, messianic warriors tasked with assassinating key figures around the globe in an attempt to put a stop to all Heavenfield research.

Otto becomes an unwilling fighter, his loyalty to the 'Holy Land' keeping him in the struggle against ever-stronger forces that assail them.

Picked to lead a squad of the Exiles' latest armoured fighting vehicles, at only nineteen Otto is already a seasoned veteran of many conflicts, and finds himself in some of the bitterest fighting at the onset of the Heavenfield wars.

As events run up to those detailed in the first Heavenfield novel, Otto must help salvage the remains of the Exiles' cause, and ultimately join forces with his previous enemies, as they unite against an overwhelming force that threatens to bring the world to the brink of destruction. 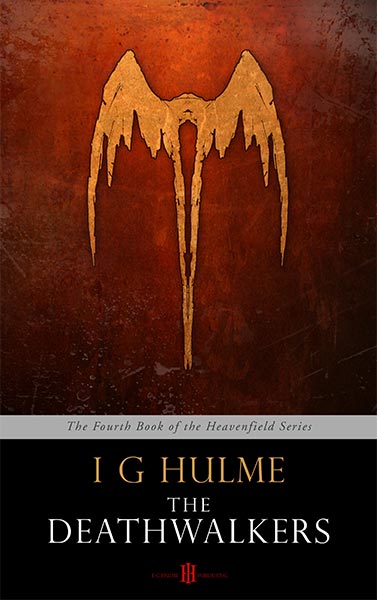 The fourth novel of the Heavenfield series goes back to the events directly after the first Heavenfield novel. It follows the story of Captain Gray, commander of a squad of American troops from the 306th Company - the notorious 'Deathwalkers'.

After the horrors of the Heavenfield, Gray and his men must deal with the shocking and brutal symptoms of exposure to the Field. But any hopes of returning to safety in America are dashed when it quickly becomes apparent that the threat from the Exiles is far from over.

Forced to return once more into the Heavenfield, Gray quickly finds himself caught in the middle of plots and counter-plots, while he himself is thrust into a struggle to come to terms with the devestating changes exposure to the Heavenfield has inflicted upon him...

This novel is currently in production. Check out its progress below:

Progress on The Deathwalkers novel

Check out the progress so far:

Other Works by the Author

INTO THE FIRE is the first book in the LUMINA series, a fast-paced space saga that follows Ryann Wade in his coming of age, just as the colonised galaxy faces the threat of an imminent invasion. Lots of action - dogfights in space - what's not to like! 😉

For all of you who love Star Wars, Star Trek, Serenity, Starship Troopers - a great sci-fi epic military space-shooter!

The Circle of Souls

"...Three cheers for Ian’s inaugural work, it is simply spectacular. The writing is journeyman, the characters are as real as your next door neighbor, and the plot absolutely transfixes the readers, leaving them piled in a heap in the corner delirious with anticipation for the next installment. Top that off with his haunting narration and unearthly art work, and you cannot leave without a smile. HeavenField is undeniably among the top ten Podiobooks ever produced and is not to be missed by any legitimate scifi/fantasy or horror fan..."
read review

"...some of the finest audio fiction I've ever listened to..."
Podiobooks

"...the listening experience of this podio was spot on..."
Audiogeist

"...I was walking to work today and listening during a really creepy part (uh like most of the story) and a guy in a house I had just passed was in his garage doing some work and shot off his nail gun and it made a loud POP! I shot off a girlish scream and in turn he screamed. I think he thought he shot me (and I thought demons were going to rip my soul out of me!)..."
podiobooks

And HUGE thanks for all the supportive emails I have received. Here's a small selection:

"...This is one of the best podiobooks I have yet to find, thank you so much..."

"...Your books are amazing, and you and Scott Sigler have me addicted to podcasts. Your artwork and music are perfectly matched to your stories..."

"...This is awesome. I've been spreading the word, but thought you might like to know directly that I'm enjoying this tale immensely. There's just enough intrigue and you're doling out information at exactly the right pace..."

"...just wanted to say what a fantastic job you have done. Outstanding story, superior execution. Really something to be proud of..."

"...just want to say that you have an amazing story, with brilliant likable characters, unique technology and really immersive writing/podcasting style..."

"...I just wanted to say thanks for a great audiobook.The story is fantastic and the voicework brilliant too..."

"...I have listened to your pod casts like 3 times over while i work! Makes the day go by a little easier, and i absolutely can not stop thinking about this story! I can not wait to hear the rest of this!!..."

"...I simply had to write in to tell you how much I’ve been enjoying Book II of The Heavenfield. I haven’t been so excited and awaiting a new podcast in such a long time. As I’ve said in the past, I really admire your restrained style of narration, your vivid descriptions, and your subtle use of sound effects and ambience..."

Thank you to everyone who has written in with such supportive words.
It really does give me that little boost when creative energies are low and I'm wondering why I'm spending all my time/money/life on this particular obsession!

My heartfelt thanks go to the following for all their support and encouragement:

For tireless support, her belief in the project, and her photo for the book cover montage (and her voice in the Prologue).

For their friendship, endless help and support, and especially for the use of The Heavenfield theme and Heavenfield landscape images.

For his great work editing the manuscript, his voice acting on the Prologue, and all his tireless support.

For all their help & work coding the original vsn1 website.

For always being there to help. x

For their tireless support and help.