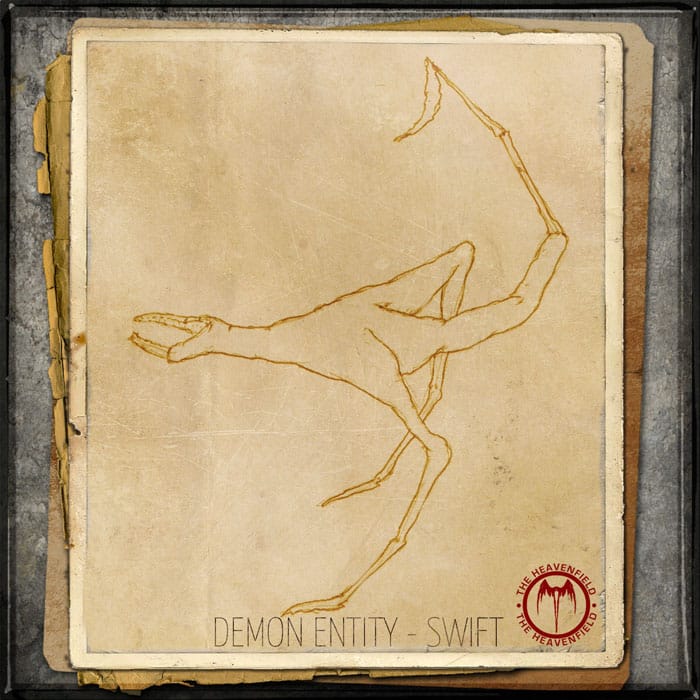 A Swift is the common term for a bipedal, flightless form of the Winged Demon.

First encountered by the Americans when a group were born from the blood of an X-Class Demon during the Battle of Maunsworth Field. The act of destroying a ghost or demon can often be more dangerous than the entity itself. Sometimes huge amounts of latent energy can be released by a dying creature, often with unpredictable results. Such was the case during the Battle of Maunsworth Field, when a Demon was brought down by concentrated fire from the defending forces.

It’s death-throes gave birth to an even stronger Demon, which came close to reaching the Maunsworth Entry-Point. Only direct intervention of General Boynes’ Flagship succeeded in bringing it down. During the battle, the falling blood of this entity gave birth to a host of lesser demons. Wherever a drop of blood fell, a creature would rise up from the red earth. Dubbed ‘Swift’ by the troops, these creatures stand four or five feet tall, and are extremely fast and agile. Their mandibles are razor-sharp, and their barbed tails can slice open an environment suit with ease.

Most Swifts were either destroyed at the Battle, or fled into the caves around the Entry-Point.

It is thought that the Winged Demons inhabiting the caverns around Maunsworth could be descendants of these creatures.

When the journals of the Exile Otto Kandinsky were discovered, researchers found mention of the same Demon entity during the battle to escape the Fortress after it fell to the Cold-Ones.

I glanced back to the burning slopes of our Fortress. The huge Demon still stood there, wreathed in ﬂames, plunging its limbs deep into the heart of its structure. But, to my dismay, I saw movement within the ﬁre. The burning blood from the creature’s limb still ﬂowed freely, and wherever it fell more ﬂames sprang up.

And there was something growing there, as if the life that ﬂowed from the monster watered the earth, sowing some terrible seeds that now blossomed and grew. Strange, two-legged beasts were breaking from the earth, pushing up from wherever the titan’s blood fell. They had long scorpion-like bodies, that tapered down to slender tails and ended in vicious hooks of bone. They were faceless, their heads blind, nothing more than a pair of great mandibles that snapped together in a frenzy of blood-lust. Hundreds of these creatures sprang up from the ground, bursting out with terrible guttural cries.

As if suddenly sensing our presence, they turned their blind faces to our group, then charged after us with a heart-stopping cry.


Extract from the Diary of Otto Kandinsky