Forced together into an uneasy alliance, the British, American and Exiles fought together against the Demon army.

The Entity Sheol and her forces marched down the broad valley towards the Entry-Point (E.P), trapping the allies against the high cliffs. Speers, in his new form, headed the Demon horde, aboard his flagship the Herald.

Gargantuan creatures of every nightmarish form were herded into battle by Sheol’s lieutenants, malevolent, horrifying devils. Vastly outnumbered, the allied soldiers fought in desperate defence, and would have been overwhelmed had it not been for a force of Angels coming to their aid.

Even then, this may not have been sufficient to turn the tide, but Thomas Sullivan, in defeating Sheol, broke the will of the Demon army which fled, purposeless back into the wastes.

A small contingent of British troops from the Maunsworth Garrison were tasked with defending the Entry-Point. Comprising exclusively of infantrymen, although few in numbers, the members of the 'Special Expeditionary Force' were all elite-trained soldiers with experience of the Heavenfield.

Manipulated by the Entity Sheol, the joint leader of the American forces Lt Colonel Speers headed a task-force to confront the British forces at the Maunsworth Entry-point, whom he mistakenly believed were responsible for the so-called 'terrorist' attacks (in fact perpetrated by the Exiles).

Once in the Heavenfield he was visited directly by Sheol, who gifted him two flagships (the Herald and the Divinity), hoping the U.S forces would destroy the British defenders, leaving the way to the Entry-Point open for her and the Demon army.

Besides the Flagships, the American troops were predominantly Infantry-based, with only a handful of freshly-built Fieldships (the design based upon a captured Exile vessel), and even less armoured transport vehicles which were abandoned by the Exiles in the retreat from the siege of the U.S Entry-Point at Fort Caulder.

When Dr. Henschel realised that he too was being manipulated by Sheol, and that she would eventually overcome him, he destroyed the Exile Array, trapping a large number of Exiles within the Heavenfield. When it was clear that the Fortress would finally fall to the Demon Army, the remaining Exiles broke through the attacking horde, salvaging as many vehicles and weapons as they were able.

They braved the arduous and dangerous route to the Maunsworth Entry-Point partly in an attempt to put an end to the British Standing-Point Project, but they also realised this was their only viable chance to escape from the Heavenfield.

The Exile force was led by Colonel Vladic, an experienced commander. Not an army as such, the force was a mixture of all the survivors from the Fortress - mostly military-trained personnel, but also including many members of the science teams and staff. They had a large number of transports and armoured fighting vehicles, and had even managed to salvage several artillery units (which would prove of great use against the larger Demon Entities).

They were short on numbers, having lost a great many in the breakout from the fortress, and all their Field-Walkers were lost (most having to be abandoned due to lack of fuel and ammunition), apart from a unit that was being air-lifted back from the siege of Fort Caulder at the time of the breakout. This unit, the 7th Katyusha Company led by Otto Kandinsky, with its detachment of Fieldship transport craft, added much-needed fire-support to the allied forces.

The Exiles' great experience of combating Demon threats would later prove invaluable in holding together the less-experienced U.S. infantry, although it would take several hard-earned lessons before the American leadership would grudgingly admit to the usefulness of the Exiles' knowledge.

Led by the Entity Sheol and her Demon Lieutenants, the Demon army was vast in size, comprising every imaginable mutation and creature. They had marched upon the Exile Fortress, attempting to force their way through the Entry-Point there, but Dr. Henschel, realising he was falling under the influence of Sheol, destroyed the Exile Array before the Fortress fell.

As the Exile survivors fled the ruined Fortress, the Demon army followed them all the way to Maunsworth, intent on capturing the Entry-Point there.

The American traitor Speers took control of his Flagship and headed the Demon Army as it marched upon the allied defenders, but even his vast craft was dwarfed by some of the Titan-Class Demons that made up the vanguard of the horde.

All classes of Demon were to be found fighting at the Battle of Maunsworth Field. For British and American troops this was their first experience of Demon Entities, and was a horrifying ordeal. From human-sized to gargantuan creatures, each was unique in its own twisted, nightmarish form [see Demon Entities].

Combined British, American and Exile forces set up defensive positions along the high ground around and in front of the Maunsworth Entry-Point (E.P.). British and American forces are comprised predominantly of infantry units (with American forces also possessing 15 Fieldships and a handful of armoured vehicles captured when the Exiles retreated from the siege around the Fort Caulder E.P.).

Exile units are made up of the remnants that fled the destruction of their Fortress, and are mostly armoured transport vehicles with a handful of Field-Walkers and a small artillery section. At the beginning of the conflict they possessed a few Fieldships in varying states of battle-readiness.

Lt Col. Boynes, commander of the U.S. forces, initially sends out a reconnaissance and intercept mission of 3 Fieldships, against the better judgement of the Exiles. Upon reaching the approaching Demon army all craft are lost.

Still unable, or unwilling to acknowledge the very different fighting conditions of the Heavenfield, he then places a small detachment of the 306 Infantry Company (later to be known as the legendary 'Deathwalkers') at the forward position of Palmer's Point, in the hope they will blunt the force of the Demon attack, before making a fighting withdrawal under covering fire from a section of Vladic's 'Katyusha' mobile artillery unit (6 Field-Walkers under the command of Capt. Otto Kandinsky) dug into the valley side just North of the American positions.

Colonel Vladic, the ranking Exile officer, attempts to dissuade Boynes from this course of action (having far more experience of Demon Entities than the U.S. commanders), but grudgingly complies, seconding some of his officers from the infamous 'Wraith' squad to liaise with and support the inexperienced troops at Palmer's Point.

Artillery units are dug in on the gently-sloping valley sides to the North and South of the E.P. along with armour and infantry support.

Fieldships are grounded, stationed on top of the high cliffs in firing positions, and held in reserve.

With the Demon army approaching in full-force up the centre of the broad valley, the allied forces dig in and wait. 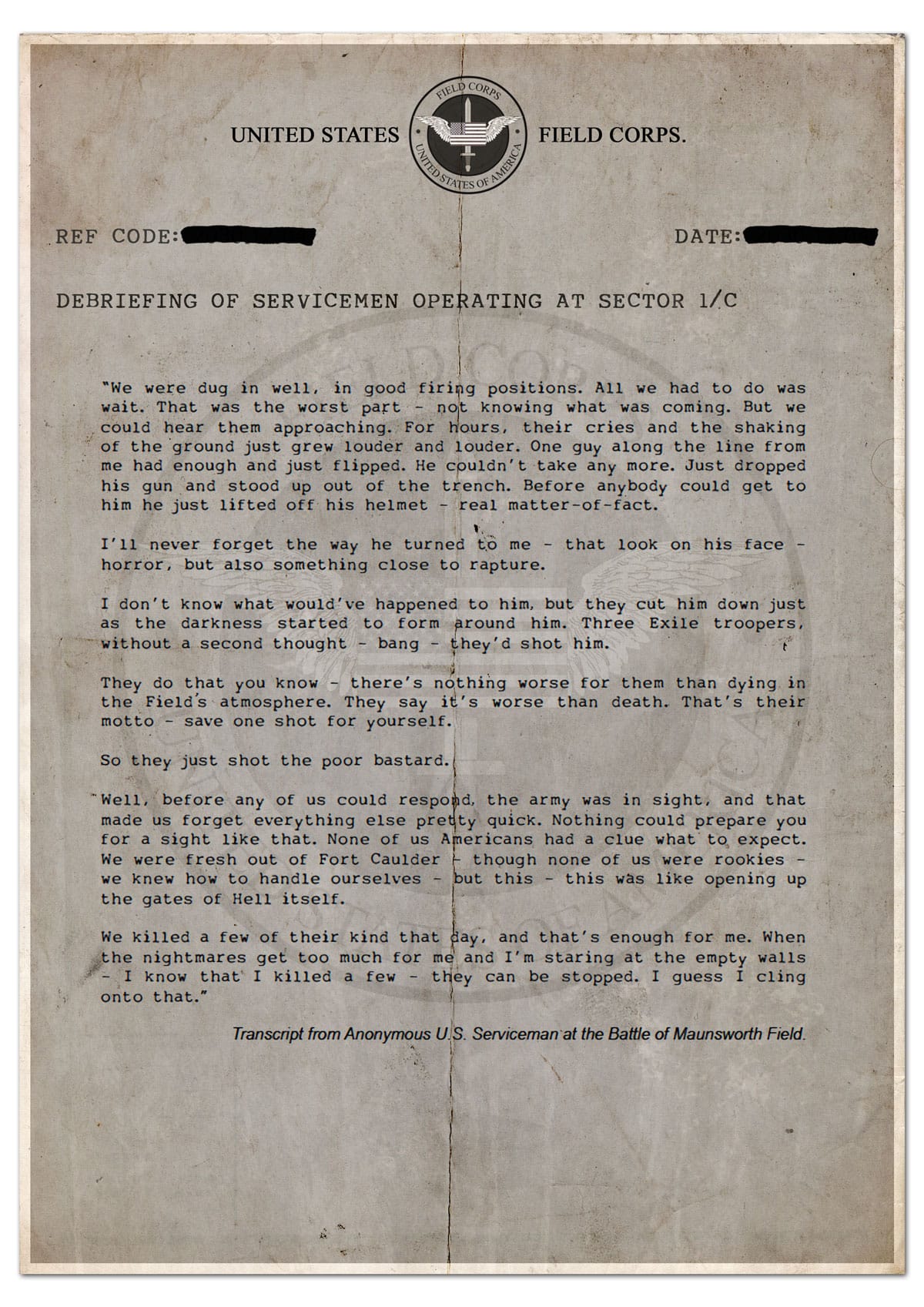 U.S. and Exile soldiers dug in around Palmer's Point are the first to make contact with the advance forces of the Demon Army. A supernatural appearance of the American's own comrades assails the stricken troops, and the Americans, inexperienced at dealing with such entities engage them in a fire-fight.

The resulting combat leads to a rout, with troops falling back in disarray across the plain, back towards the Maunsworth E.P.

Troops upon the cliffs attempt to give covering fire, but most of the forward troops are lost, swept away with the onslaught of the Demon Army.

A small band of U.S. soldiers, held together by the more experienced Exile officers retreat to the higher ground of Palmer's Point, engaging the Demons as they sweep around the outcrop and on towards the Maunsworth E.P.

The heavy fighting around Palmer's Point fails to slow the tide of the advancing army, and the Demons, led by Lt Col. Speers aboard his flagship 'The Herald' sweep around the outcrop cutting off those forces on the upper slopes of Palmer's Point, and make a frontal assault along the narrowing valley.

The flanking artillery units, dug in along the valley's southern side target their fire exclusively upon the Herald, forcing Speers to halt his advance, leaving the Demons to lead the assault. The northern artillery units are hampered by American infantry retreating from Palmer's Point.

To the North of Palmer's Point Otto Kandinsky leads 3 other Field-Walkers (half of his available numbers) down from enfilade positions in an attempt to halt the northern charge of the Demon horde as they sweep around Palmer's Point and begin to overrun the fleeing U.S infantry. They manage to punch a wedge into the flank of the Demon assault, keeping tight formation and using concentrated fire vectors. They succeed temporarily in slowing the assault (giving a few retreating soldiers time to reach defensive positions), but the weight of numbers and low ammunition force them to attempt a fighting withdrawal.

With all troops now engaging the enemy, Col. Boynes orders the remaining Fieldships airborne, and to engage the head of the Demon army. 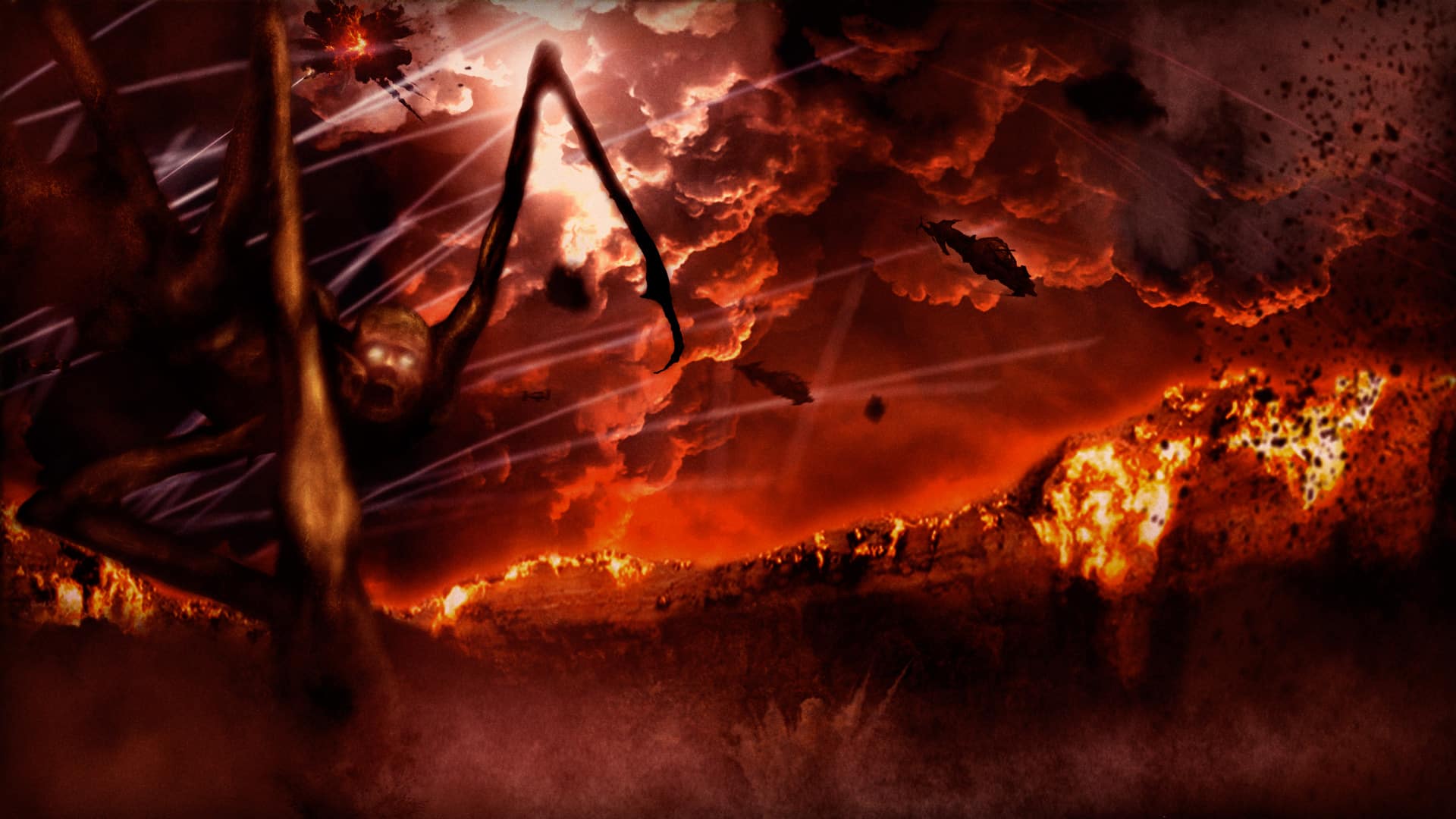 Several Titan-Class Demons at the head of the advancing army succeed in punching their way through the outer perimeter defences around the Maunsworth E.P. In a desperate attempt to halt the seemingly-unstoppable creatures, Boynes orders his flagship, the Divinity, to engage the nearest Titan-Class, ramming the creature.

At this moment the allied forces are in disarray, each unit fighting desperately for their own survival. Virtually all the remaining Field-Walkers and armoured vehicles around the E.P. have been knocked out or abandoned due to depleted ammunition.

The Southern artillery positions are soon to be overrun, and the Demons are too closely engaged with the allied infantry for the remaining artillery to effectively target them.

At Palmer's Point, the remaining infantry continue a fighting-withdrawal, making use of the difficult terrain to their advantage.

Meanwhile, to the North of their positions Otto Kandinsky's Field-Walker group is faring less well. Two of the Four Walkers manage to extricate themselves to higher ground, but the other two (including Kandinsky's), out of ammunition are surrounded and under constant attack. They attempt to break-out on foot, but many are killed or injured.

Parallel to these events, Thomas Sullivan is witness to the Angel Entity engaging in combat with Sheol, the leader of the Demon Army.

The allied forces are on the verge of defeat. Col. Boynes' flagship is crippled, and the few remaining artillery units and armoured transports are ineffective against the weight of attacking numbers.

With only moments to spare before the first of the Demons reaches the Maunsworth E.P. a horde of Angels is sighted upon the South ridge. Sweeping down into the flank of the Demon army, the Angels quickly cause complete disarray amongst the Demons as they turn to engage the new threat.

Led by a group of Exile officers, the remaining infantry and mobile units around the E.P. mount a counter-attack.

Speers follows the rout, and still aboard the Herald, escapes into the wastes.

With the defeat of the army, the Entry-Point (which has somehow been held in a continually-open state) begins to degrade, and the allies are forced to withdraw from the Heavenfield, abandoning all their vehicles and aircraft.

The Legacy of the Battle

Such is the nature of the Heavenfield that the fallen from the battle are forever imprinted into that place - a terrible legacy, they manifest as entities and memories replaying events for all time.

And when the American forces finally did return to the battle-plain they discovered many of the Demons had returned, wandering the valley, feeding upon the multitude of ghosts that remained as a grim reminder of the lives lost during the Battle of Maunsworth Field. 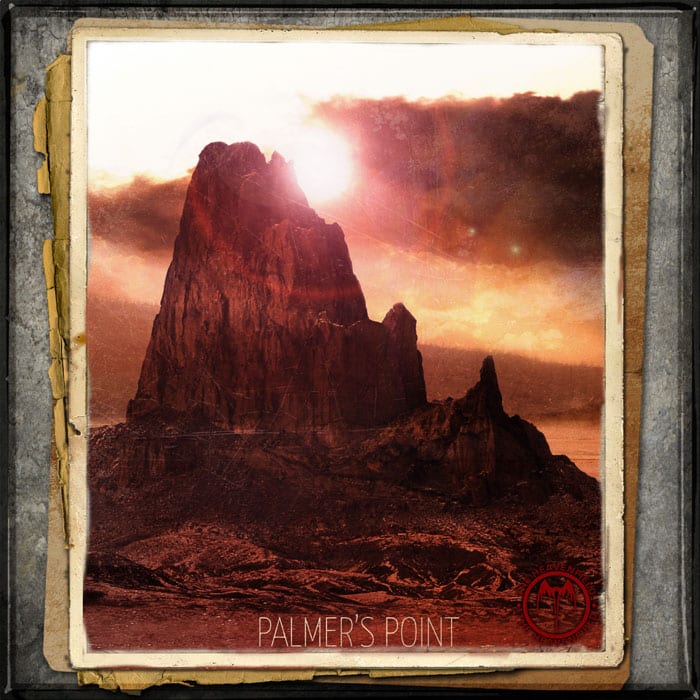