An armoured fighting vehicle, originally of Exile design, but later put into service by the American 15th Armoured Company. 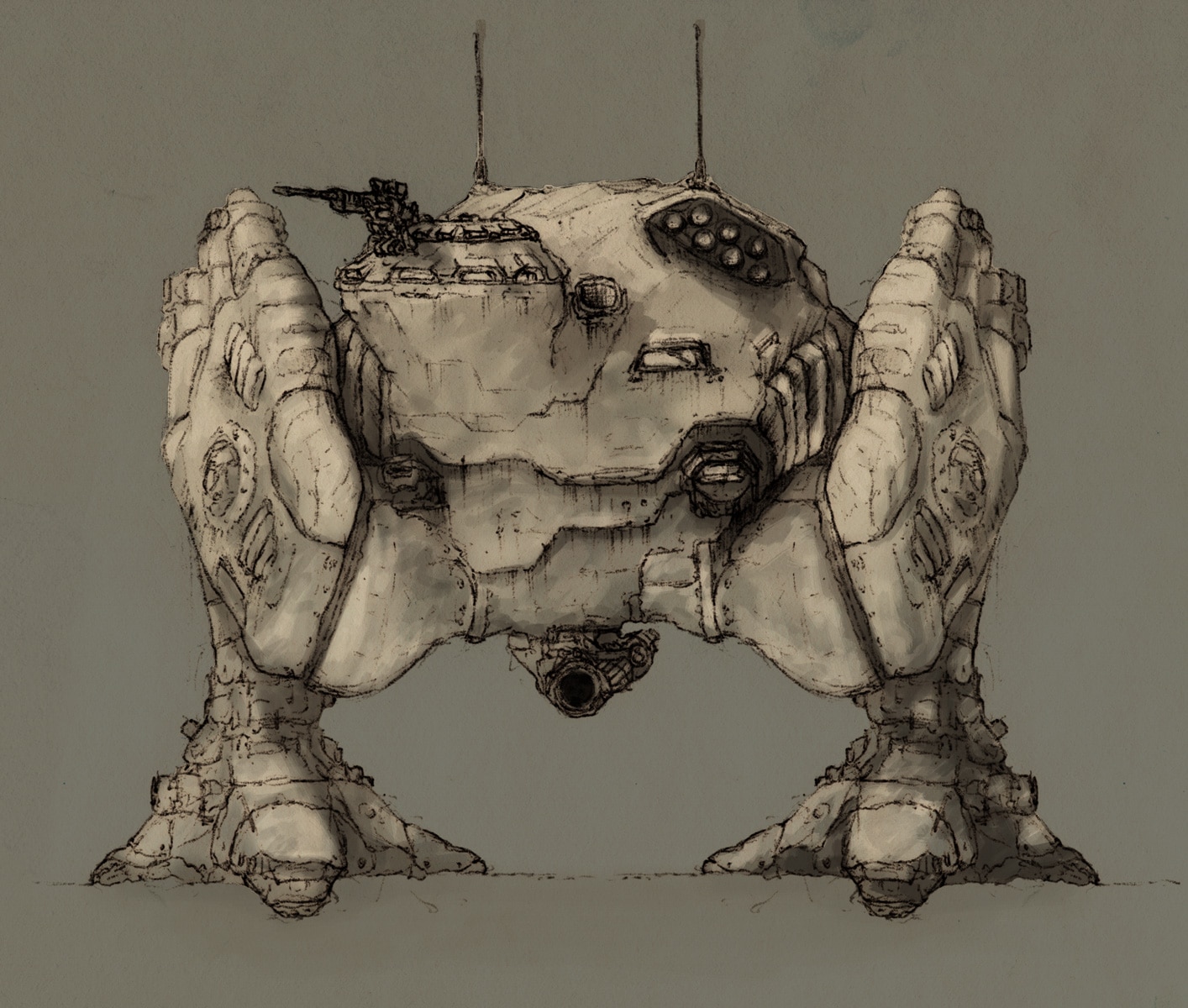 The original A-40 Walker was rushed into service at the orders of Dr. Henschel, along with the prototype Fieldships. It was an effort to cope with the shifting and unpredictable terrain of the Heavenfield, but the early vehicles were plagued with bugs and design faults. Dust and sand in particular played havoc with the power-plants, until an adequate filtration system could be developed. Even so, the Walker was well-armed and armoured, able to carry a huge 80mm energy cannon, and later, on American variants, a missile pod and smoke grenades.

Due to the desperate state of the Exile defences, 14 early prototype Walkers were rushed into service, air-lifted to the defensive encirclement around the American Devil's Rock Entry-Point.

Several Walkers were lost early on due to mechanical failure, and these fell into American hands during the early skirmishes. They were in good enough condition to allow re-engineering and upgrading, which ultimately resulted in the A-54 Goliath, a formidable and reliable fighting vehicle. 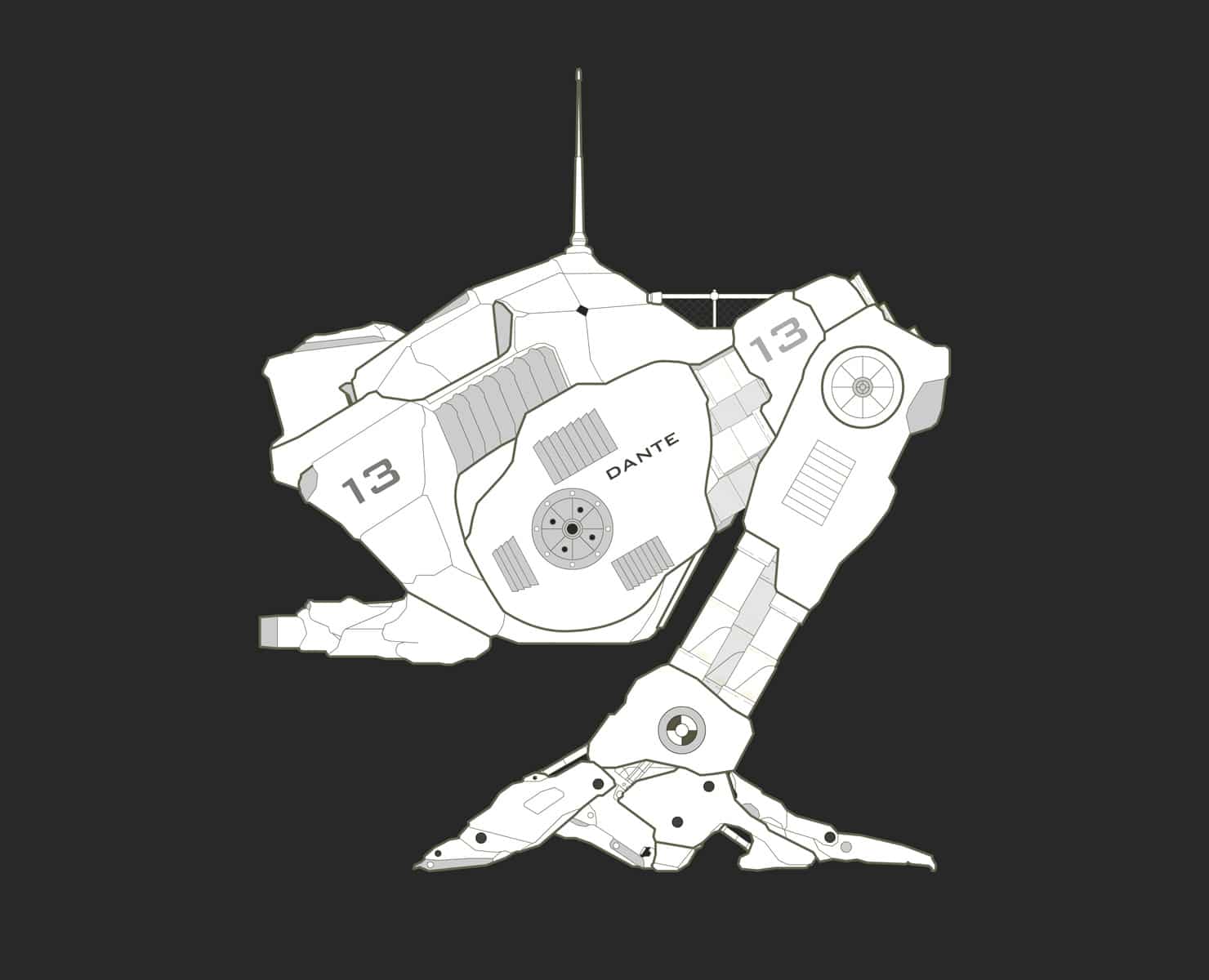 Originally the Walker was designed with the main armament on top of the turret for an optimum firing position.

But in early prototypes the recoil from the weapon proved too great, causing dangerous instability issues, and so (much to the protest of many Walker commanders) the weapon was moved to a position beneath the body of the vehicle.

This provided a much more stable platform, but the operational functionality was greatly reduced, as commanders had to expose their hulls from cover in order to target enemies.

As such, this proved less problematic than at first envisaged, since most targets engaged by the Exiles were either ghosts or Cold-Ones, neither of which (usually) had stand-off weaponry capable of penetrating the thick armour of the A-54.

Similarly, in early encounters with the Americans around their Entry-Points, the lightly-armoured U.S. forces found it almost impossible to incapacitate the Walkers, and a disproportionate fear was to grow within the American forces, to such an extent that merely the sound of an approaching A-54 was enough to send troops into a panic, and there are several accounts of soldiers deserting their positions in a rout at the sighting of one of these great lumbering behemoths appearing over the rooftops. 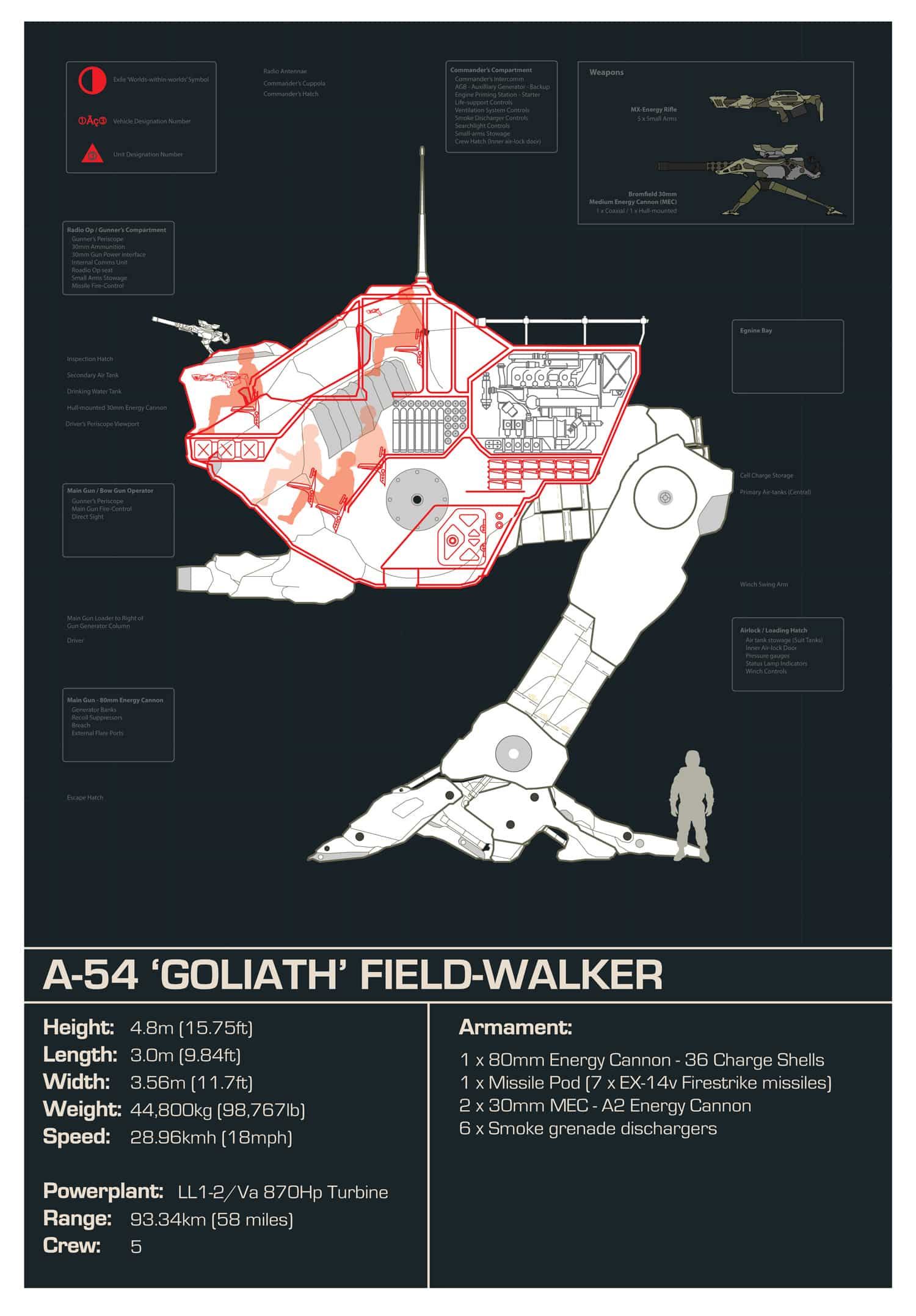 Due to difficulties inherent in steering the Walkers (especially in confined, urban environments), the original designs proposed a bipedal carriage with a traversing turret mounted upon it. This would allow the main armament to be traversed without moving the entire vehicle. However, it quickly became apparent that the immense recoil of the 80mm energy gun would topple the vehicle if firing from anything other than virtually straight ahead, and the movable turret was dropped in favour of the fixed gun, limited traverse system.

The original Walkers built by the Exiles (designated the A-40 by U.S. forces when appraising captured units) were a radical concept, designed to navigate the difficult and shifting terrain of the Heavenfield.

There are many stories that original concepts were taken from vehicles recovered from the Ghostfields, and, though difficult to believe, elements of the Walker design were so technologically-advanced, there may be some truth to these rumours.

The drive came from a sealed turbine unit, a derivative of the Standing-wave system found in the Exile Fieldships. This was housed in the engine compartment to rear of the vehicle, accessed via the bay doors on the top rear of the hull. Next to two large radiator covers were two circular ventilator ports for the cooling fans, one for the engine, and one for the coolant system to the main gun.

The filler caps for the coolant tank and primary air tank (compressor system), and charge points for the cell banks, were also located on the engine bay. Tools, and the locking pins for the pivot-points (used when the vehicle was being air-lifted) were stored in stowage bins built into the bay.

A wire-mesh stowage rack ran around the back and sides of the engine bay, giving stowage space for crew equipment, tools, and spare air tanks. At this point in Exile development, many soldiers and crews still relied upon air tanks for their environment suits, as there weren't enough resources to equip them with the newer Wraith-suit filtration systems.

Forward of the engine bay was the upper crew compartment. This housed the Commander and the Radio-Operator (who also operated the mounted MEC 30mm Medium Energy Cannon). The Commander had a cupola in the top-centre of the hull, while the Radio-Op sat further forward in a protruding fixed turret that gave him an excellent view of the area directly in front of the vehicle (something of a blind-spot for the Commander).

The entire upper crew compartment could be sealed off from the main crew stations, allowing the Commander and Radio-Op to keep their hatches open while the Driver, Gunner, and Loader remained within a sealed-air system. For this reason, the Commander and Radio-Op would be equipped with suits fitted with filtration systems. Often these crew would be ex-Wraiths, brought in at the express wishes of Dr. Henschel. This was for a mixture of these practical requirements, and also as a means of political control of these powerful weapons when internal struggles were threatening Henschel's position as leader of the Exiles.

As mentioned earlier, the Commander had his own cupola. These were only fitted to production variants; the prototype units had only a square hatch with three fixed periscopes. The later addition of the cupola gave the Commander a much greater range of vision, with seven slit viewports. This could also be rotated, so that the hatch could open and be used as protection while the Commander was observing from outside of the vehicle. Even with this addition though, visibility for the Commander was still poor, and they often spent most of their time sitting out of their hatch in order to get a better view.

The Radio-Operator's position at the front of the vehicle gave him an excellent firing arc with his 30mm MEC (Medium Energy Cannon), which was mounted upon a swing-arm to the right of his hatch.

Access to the lower crew-compartment was a via a sealed hatch in the floor of the commander's compartment, below his cupola.

Interestingly, the controls for the auxiliary generator and Life-support unit were in the Commander's compartment, along with the water-supply tank.

The lower crew-compartment was a fully-sealed system, allowing crew to operate without helmets, though during combat conditions they wore full environment suits, and used the Short-Supply System (SSS), with air lines plugged into the Walker's life-support unit, and only a small, emergency air-tank carried. Times away from action would allow the crew to seal the compartment, fill it with air and remove their suits.

An airlock at the rear of the hull, below the engine-bay, allowed entry and egress from the vehicle without compromising pressurisation.

Fully-forward in the hull was the Main Gun Operator, who fired the Walker's main armament, the formidable 80mm energy cannon. He had a periscope viewport, as well as a direct-vision telescope sight, with 2.9 magnification and targetting reticule.

Behind, and above the Gunner, on the right-hand side of the main recoil compensators, sat the Loader. He was beside the charge-cell port for the main gun which ran up through the middle of the compartment. A breach system allowed him to load the High-Energy Charge Shells into the gun, with expended shells being automatically expelled through a port in the floor of the hull, just behind the main gun. He also had control of the coaxial energy cannon, mounted in the front of the hull. This weapon had a limited vertical and horizontal traverse equal to that of the main gun.

The Loader had shell stowage all around his position, with rounds for 36 shots carried.

Below, to the left, and slightly forward of the Loader sat the Driver. He controlled the Walker with two stick steerers which operated clutches and brakes to the transmission for steering, and had foot pedals for accelerator, as well as an engine clutch. The driver also had controls for the hydraulics, to increase and decrease the extension of the legs. He had readout dials for oil, cell-charge, life-support, speed, temperature (engine, cabin, and power cells), as well as control switches for external and internal lights, engine start, main generator, life-support cutoff, and various circuit-breakers.

An escape hatch in the floor of the hull allowed emergency egress, though there was no airlock system here, and opening it would depressurise the crew compartment. However, crews often preferred using this hatch over the rear airlock, which could prove awkward when loading the heavy charge-shells, especially when there was no access-platform in place. 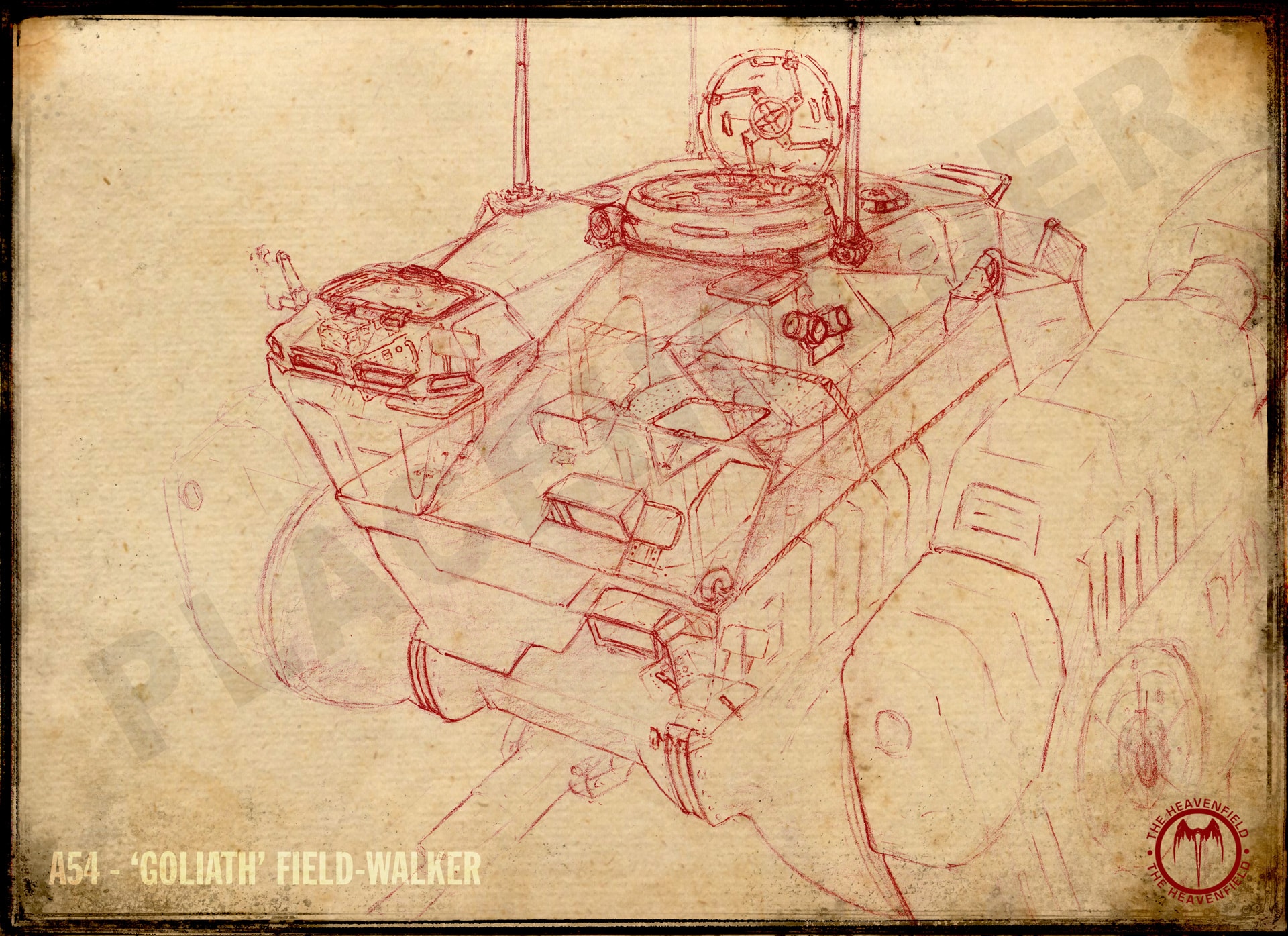 Otto Kandinsky was a Field-Walker Commander posted to the encirclement of the Fort Caulder EP at the time the Americans began their breakout. At only nineteen, Kandinsky was already a seasoned Commander, having fought alongside Henschel at the Battle of the Dead Plains.

After the US armoured column had punched a hole through the primary Exile defences, they pressed forwards, attempting to fan out and encircle the defenders. The Exile lines of communication were in chaos, with poorly-trained units deserting their posts, leaving the remaining seasoned troops vastly outnumbered.

Kandinsky and his unit of 4 Field-Walkers found themselves in the direct path of the advancing US column, his vehicles dug-in and camouflaged in a small ruins at the head of the South Valley (Quadrant A6).

He had positioned his own Walker in a burnt-out building at the entrance to the ruins, with one Walker at the far end of the valley and the remaining two up on the valley side, providing enfilade fire.

After the American armoured column had passed his position, Kandinsky opened fire with his main gun, quickly knocking out two of the rear vehicles. At that moment the rest of his Unit opened up, destroying a Gazelle Field-Walker and two Transports at the head of the column. Trapped by the wrecked vehicles, the armoured column suffered a further loss of 3 Walkers and 7 Transports, as the Exile armoured unit poured down fire from their positions.

The Americans finally managed to break out as reinforcements arrived, while all four of the Exile Field-Walkers performed a fighting withdrawal. Although Kandinsky’s vehicle was hit at least 40 times, and his main gun was disabled, he still managed to withdraw with the rest of his Unit. He was injured in the battle, suffering a broken arm, and was later air-lifted back to the Fortress. He had amassed a total of 12 confirmed vehicle kills, and was decorated for his valour.

Otto Kandinsky would later take part in the Battle of Maunsworth Field, defending the slopes around Palmer’s Point.