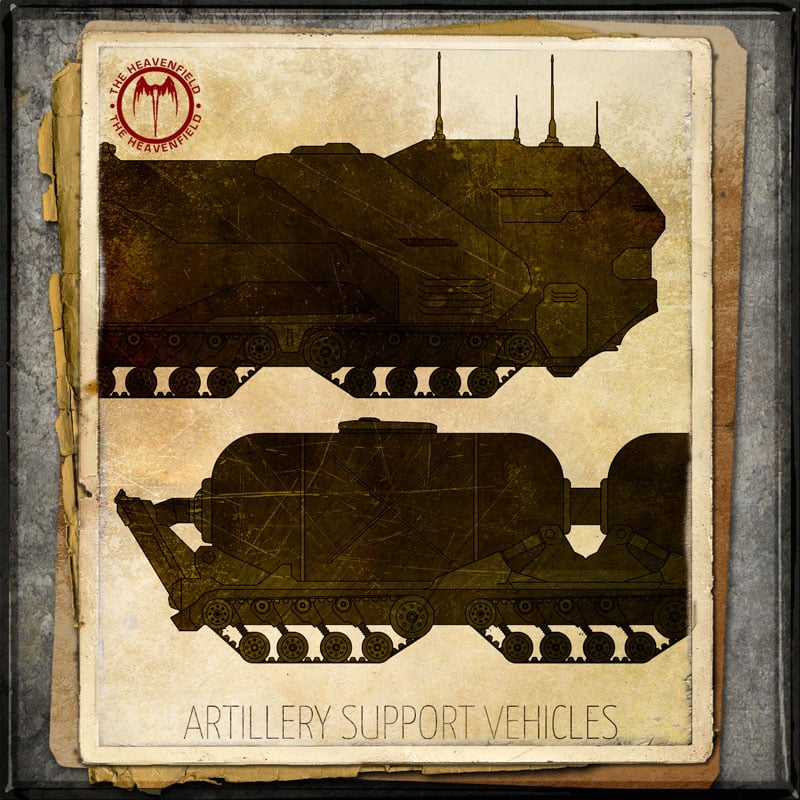 This section focuses upon the specialised support vehicles for the Patton Artillery Gun, first used during the Battle of Maunsworth Field. For a breakdown of personnel numbers see 301st Artillery Company.

Although devastating in its firepower, the Patton Artillery gun (re-designated after capture from the Exile Aurora PKII) was an enormous and cumbersome weapon, requiring a fleet of support vehicles and crew.

Only three guns were ever built, and they saw service at the Battle of Maunsworth Field under Exile command, and then later at the Battle of the Dead City after having been salvaged by U.S. forces. 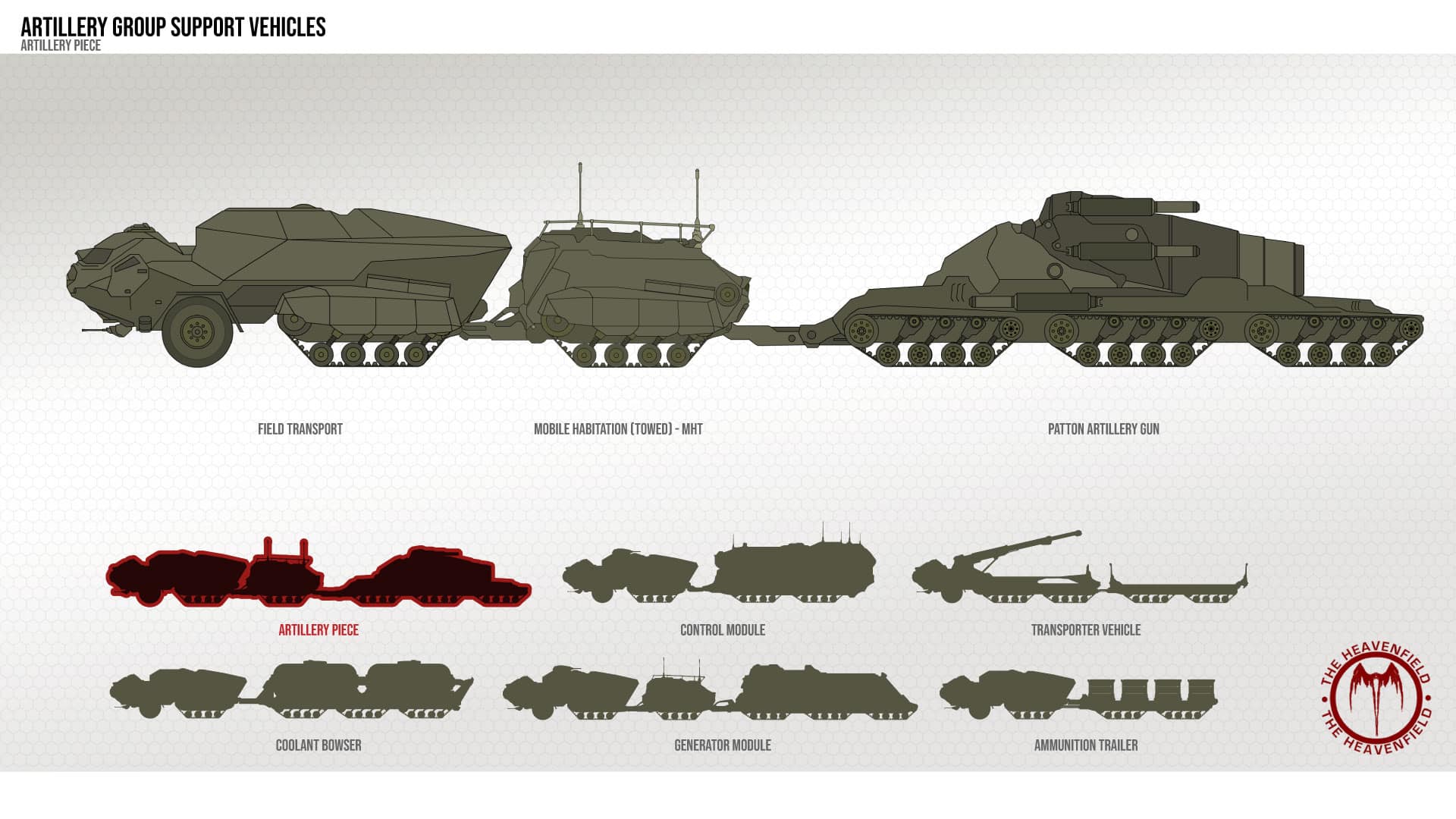 The Patton Artillery Gun itself was towed upon a tracked trailer unit, variants of this standard design being used for many of the Artillery Group's needs. A small habitation vehicle was also towed by the transport vehicle to accommodate the gun's 10 crew [see Artillery Gun]. 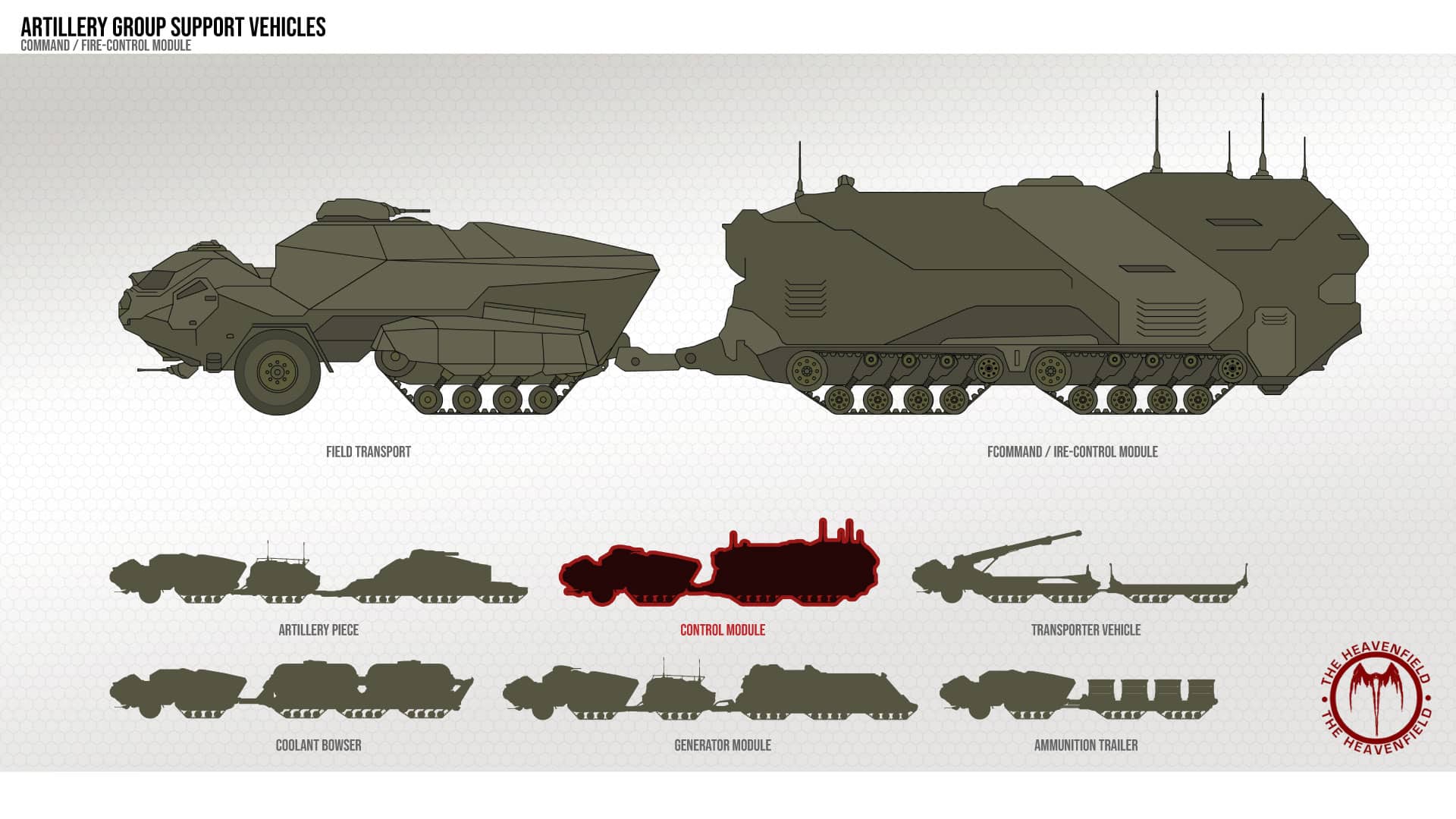 The Fire-Control Module was a two-level unit for 4 officers and two radio operators (who also acted as Driver and Weapon's Officer for the transport). The module acted as an overall coordination centre for the 3 guns of the group, as well as the air-defence units.

Target-acquisition, communications and threat-assessment were performed here, although range-finding and firing patterns were handed off to the individual commanders of each gun unit.

The module also contained sleeping and living quarters for the two senior officers (the other two officers and crew were stationed within the transport vehicle). 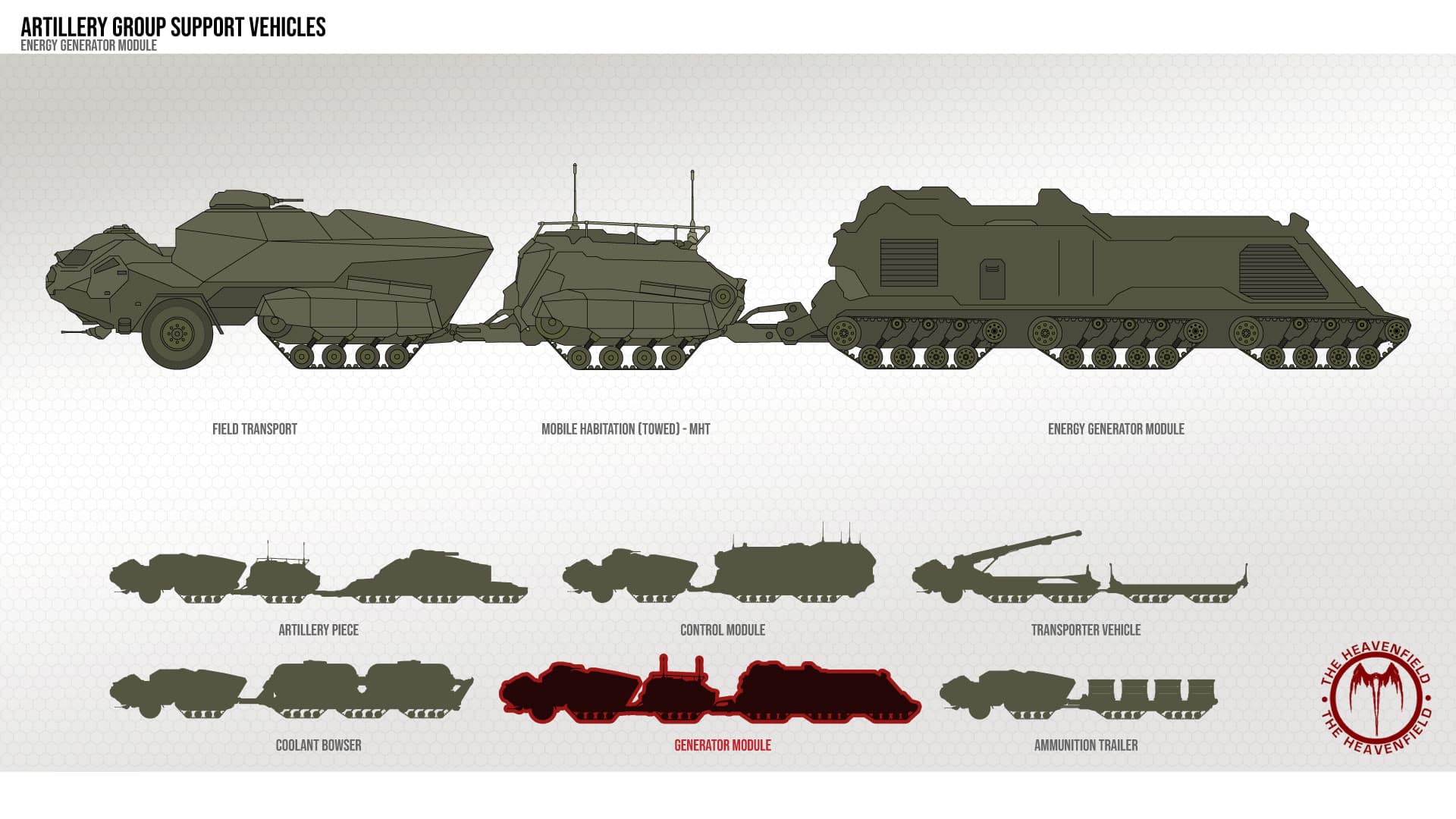 The vast quantities of energy required for the fused-plasma process were provided in part by the 550mm Charge-Shell (see Ammunition Trailer below), the rest being supplied by a large generator module.

These modules each had a crew of 12 (including the transport driver and weapon's officer) and the unit was built upon a trailer with three pairs of independent track units. At 72 tons, the module was restricted as to the terrain it could be towed over, and, with the small habitation module, the load was at the very limit of a standard transport vehicle's capabilities. 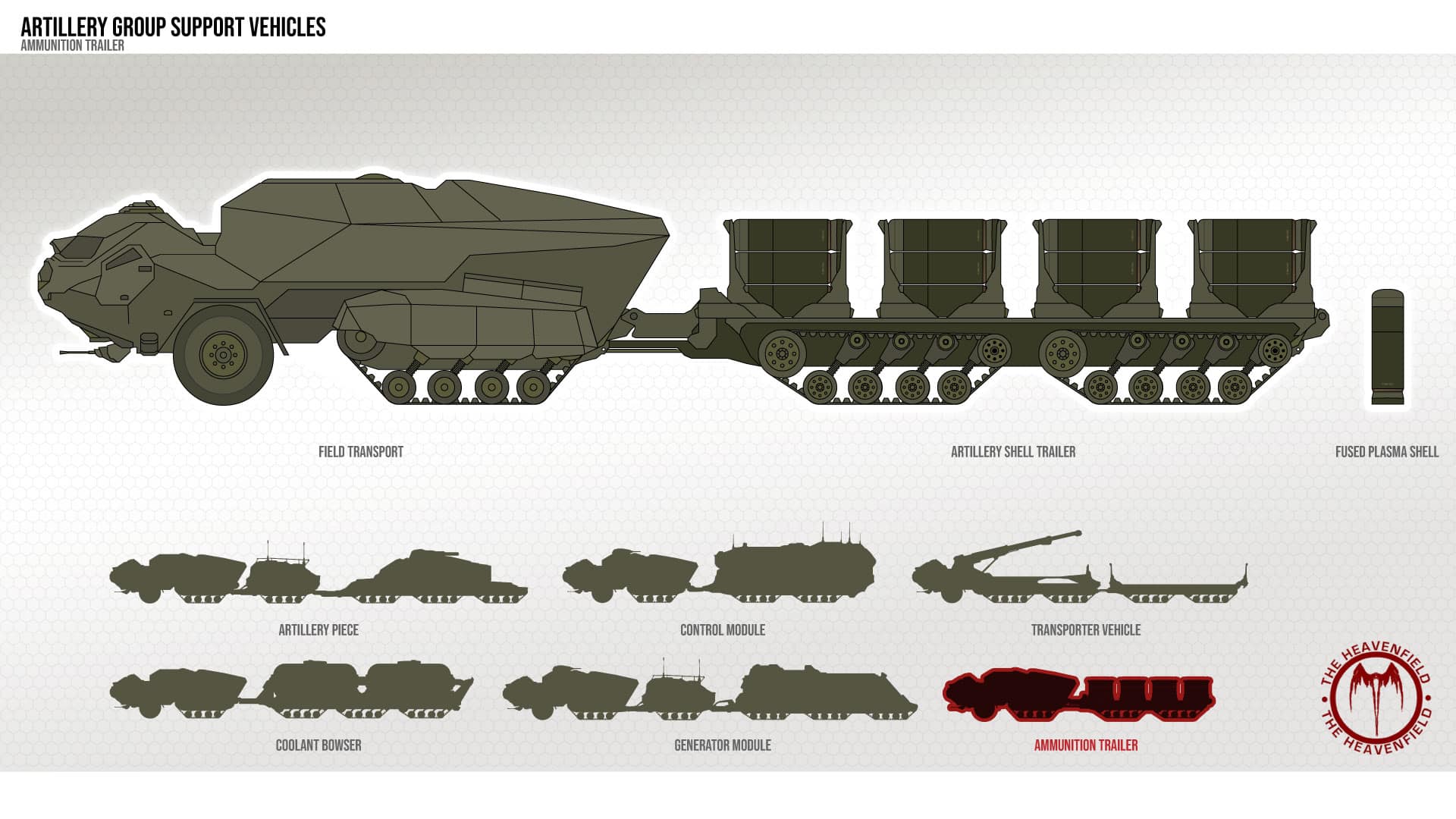 The massive 550mm Charge-Shells were carried in Ammunition trailers, built to hold 36 shells each. Each of the transports in the Artillery Group towed an ammunition trailer in addition to their designated loads. 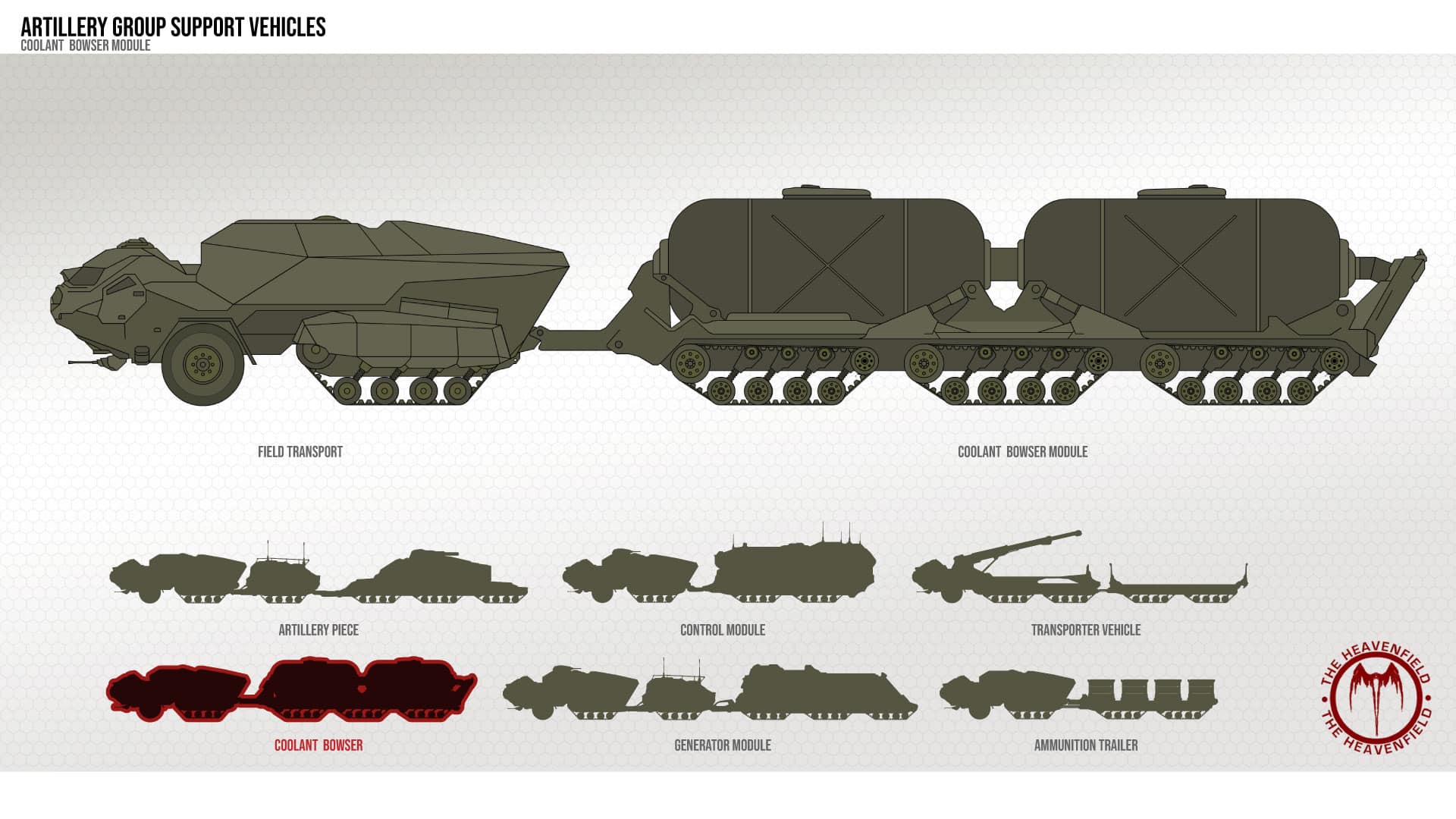 Coolant was required for both the artillery gun unit and the generator modules. A total of six ground crew were required to operate the pumps, regulators and pipe systems.

The coolant could prove volatile in the Heavenfield's atmosphere, so care needed to be taken to ensure there were no leaks or spillages. Because of this, the bowsers were often placed at a distance from the other gun units. 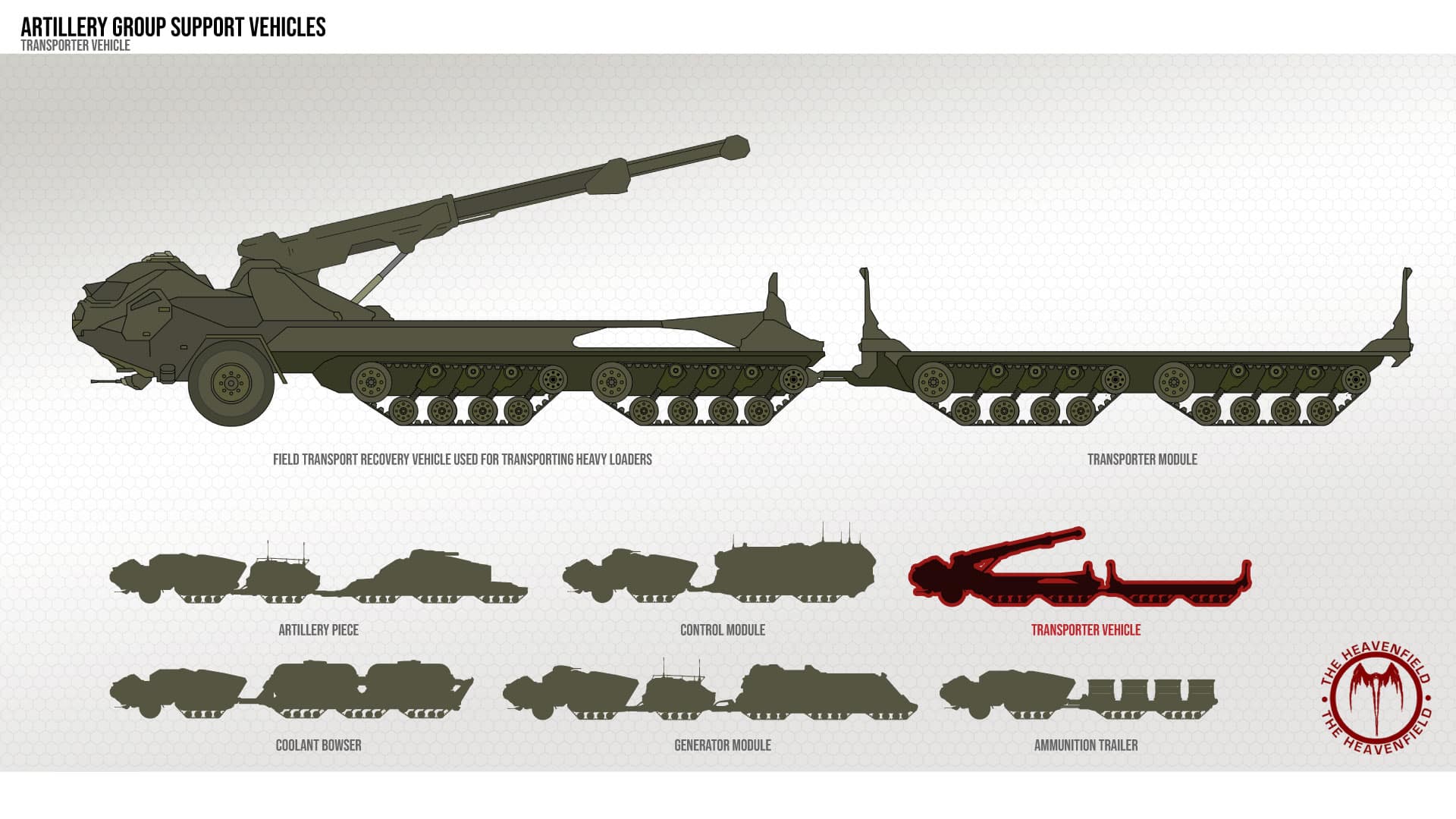 A single, long-load recovery vehicle was loosely assigned to the 301st Artillery Company. It was mainly used for assisting the Heavy Loaders with ammunition duties and dismounting the artillery guns from their trailers.

It would also be the main recovery vehicle for the fighting group, often carrying disabled walkers from the battlefield and assisting in maintenance duties.

The vehicle could also be used for the ground transportation of Fieldships. 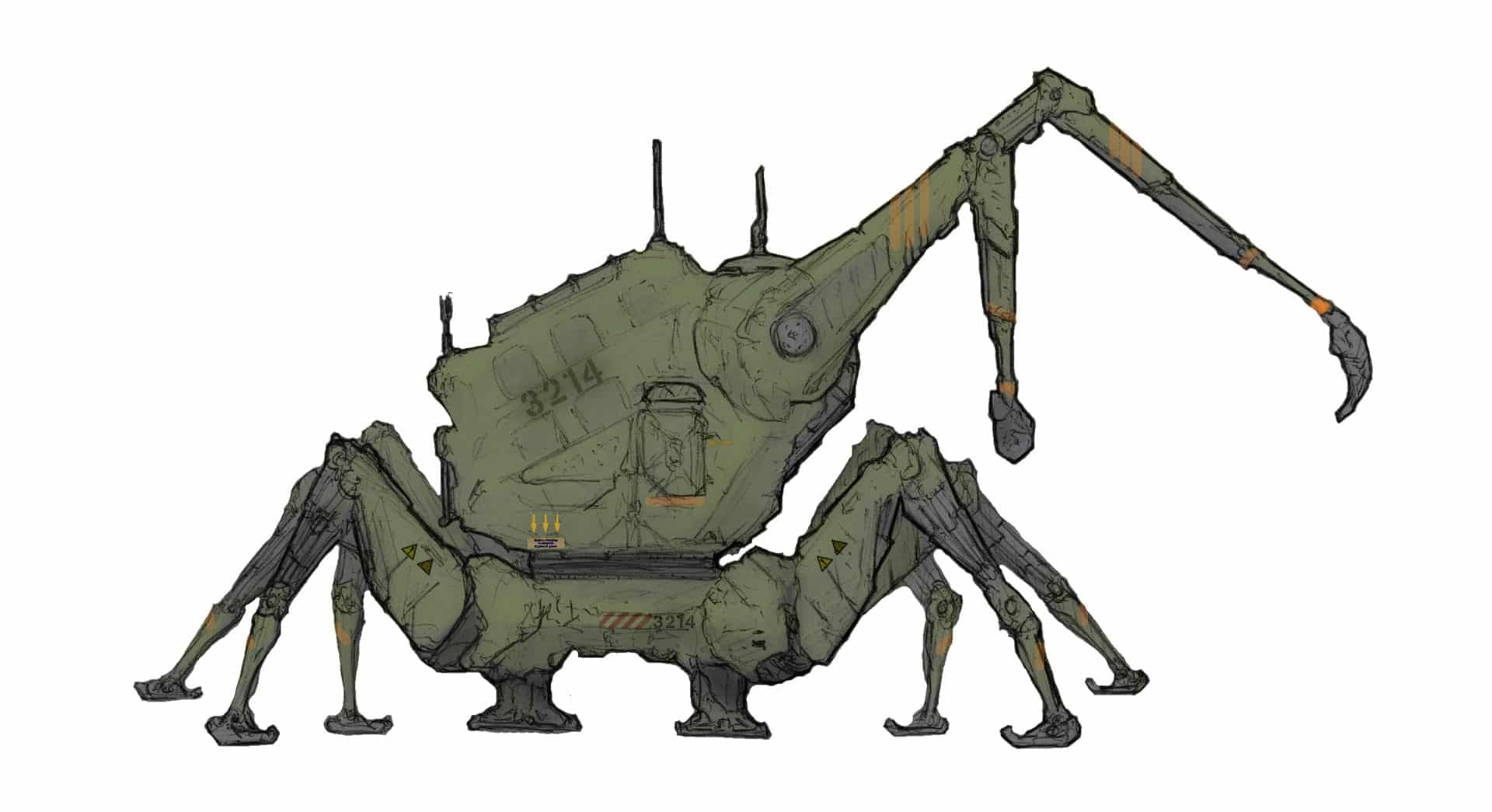 The Loadmaster Heavy Lifter was acquired from a civilian vehicle design, and adapted to use in the Heavenfield over a lengthy developmental programme.

Three units were assigned to the 301st Artillery Company, with several more being used around the Entry-Points of Fort Caulder and Williams' Airbase.

As well as the Driver and Operator, each unit had two supporting ground-crew. For more detailed information see Loadmaster - HL-31-M Heavy Lifter

The Artillery Group also had its own section of air defence weapons, usually 16 units in total (12x Light, 4x Medium). Mobile-Missile platforms were also used as part of the perimeter defence network. 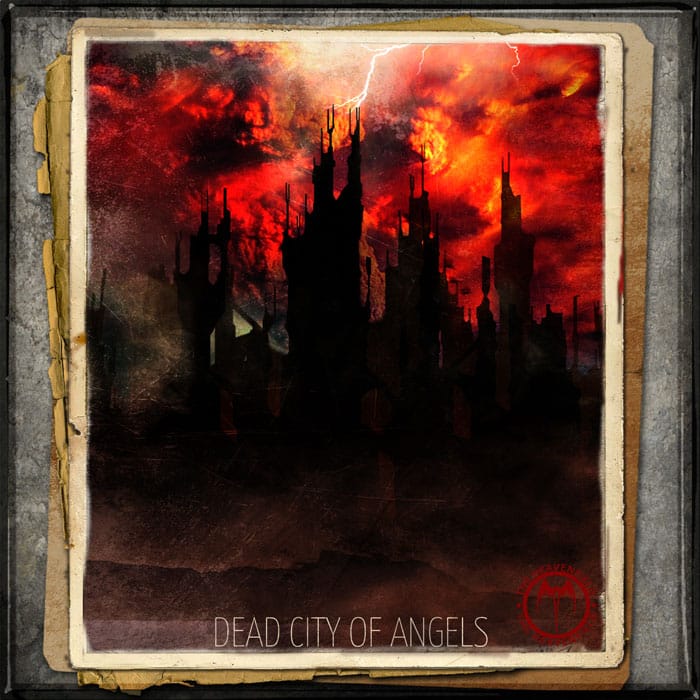