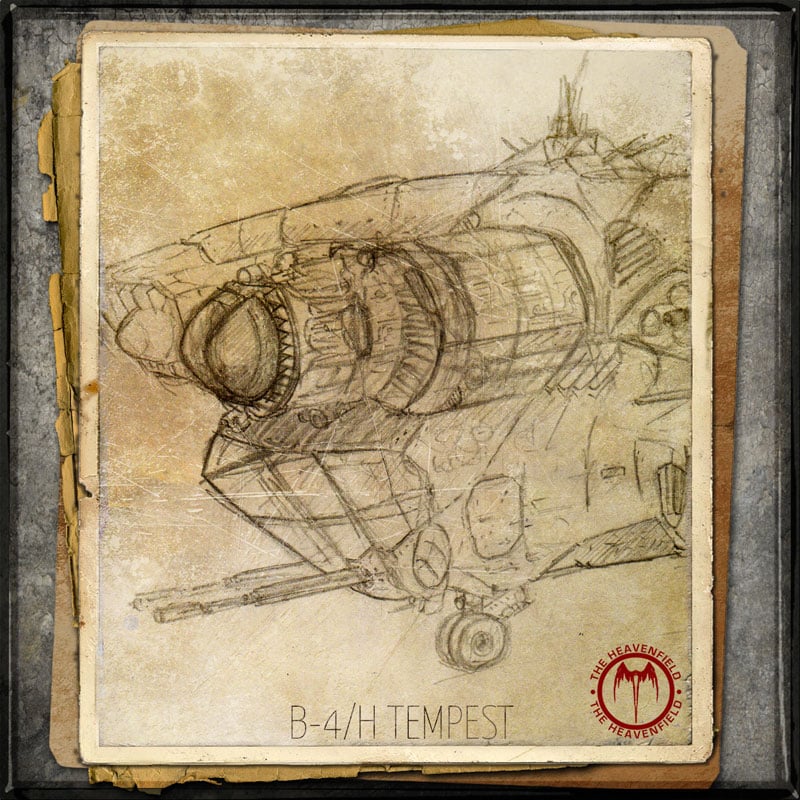 The Tempest Ground-assault aircraft was an Exile-designed Fieldship that, although proving itself highly capable in its role, came too late into production to affect the outcome of the Exiles' struggle.

The Exiles' requirement for offensive weaponry shifted after the First Ghost Incursion, with an emphasis going from infantry support weaponry to heavier units capable of dealing with large-class Demon entities, which had begun to pose a threat to the security of the Fortress.

They had been testing a more powerful energy-plant system, one which would replace the LL1-series that powered the Banshee-class Fieldships, but were facing difficulties in reducing the size and weight of the units.

The answer arrived at by Exile engineers was to design a completely new aircraft, built around these X-27 power-plants; and so the B-4 Tempest was born

Despite its incredible weight and size, the Tempest proved a reliable aircraft, capable of lifting a huge amount of ordnance. Although fairly slow in speed, there was no better craft for dealing with Titan-class Demon threats.

Sadly for the Exiles, the Tempest went into production too late for the initial phase in the Exile wars. Shortly after the first units were delivered, the Demon army, led by Sheol, attacked the Exile Fortress, overrunning the custom-built runways the Tempest needed when fully-laden.

A handful had already flown out to the U.S. Entry-Points before the attack, and these were the only ones to survive the destruction of the Fortress.

Without their runways, the remaining Tempests were forced into a transport role, supplying ordnance, and occasionally troops, to the combat zones.

By the time of the Battle of Maunsworth Field, only three Tempests remained to the Exiles. One was lost in the battle, and the other two were abandoned as the allied forces retreated back through the Maunsworth Entry-Point.

Later on, when the Americans returned to the Battle-site, they recovered the two aircraft and managed to get them flying once again.

It is believed that they were sent back to the Fort Caulder E.P. where they were studied by U.S. engineers, who would (as with so much of the Exile technology) reverse-engineer the craft and produce their own variant. This would be designated the B-71 Flying Shadow Heavy Bomber. Fitted with newly-developed missile systems, the Shadow became a formidable fighting craft.

As the Exiles began to perceive the Cold-Ones as a threat, they looked to the Tempest as an aircraft that could carry the heavy weapons capable of inflicting damage upon these great behemoths.

To this end, a custom long-barrelled short-pulse energy cannon was designed, based upon the existing weapon used successfully in the Breighton-class Fieldships. The 30mm ARC (Advanced Resonant Charge) delivered an accurate, focussed energy beam over a good range, and three of these were mounted in the nose of the aircraft, aimed by line-of-sight.

For even greater stopping-power, a 50mm slow-pulse plasma-thrower was mounted in one wing, capable of firing plasma projectiles at a rate of 40 rounds per minute (although temperature constraints and the massive recoil saw bursts of no more than four or five rounds at any one time).

A unique floating-barrel system removed much of the recoil from this fearsome gun, but it still required a strong pilot to control this already-heavy vehicle when it made a strafing run. Still, upon witnessing the devastation that this weapon could cause, it was deemed an acceptable limitation of the aircraft, and the Tempest proved to be very popular with pilots, crew, and commanders alike.